Abraham Levitan, 35, is a bandleader, piano teacher, a cappella vet, and comedic savant. He has fronted the local indie pop-rock bands Pearly Sweets & the Platonics and Baby Teeth and is the founder of Piano Power, a collective of music teachers that does house calls. He cohosts the Hideout’s monthly game show, Shame That Tune, composing songs on the fly that celebrate the contestants’ most embarrassing moments. 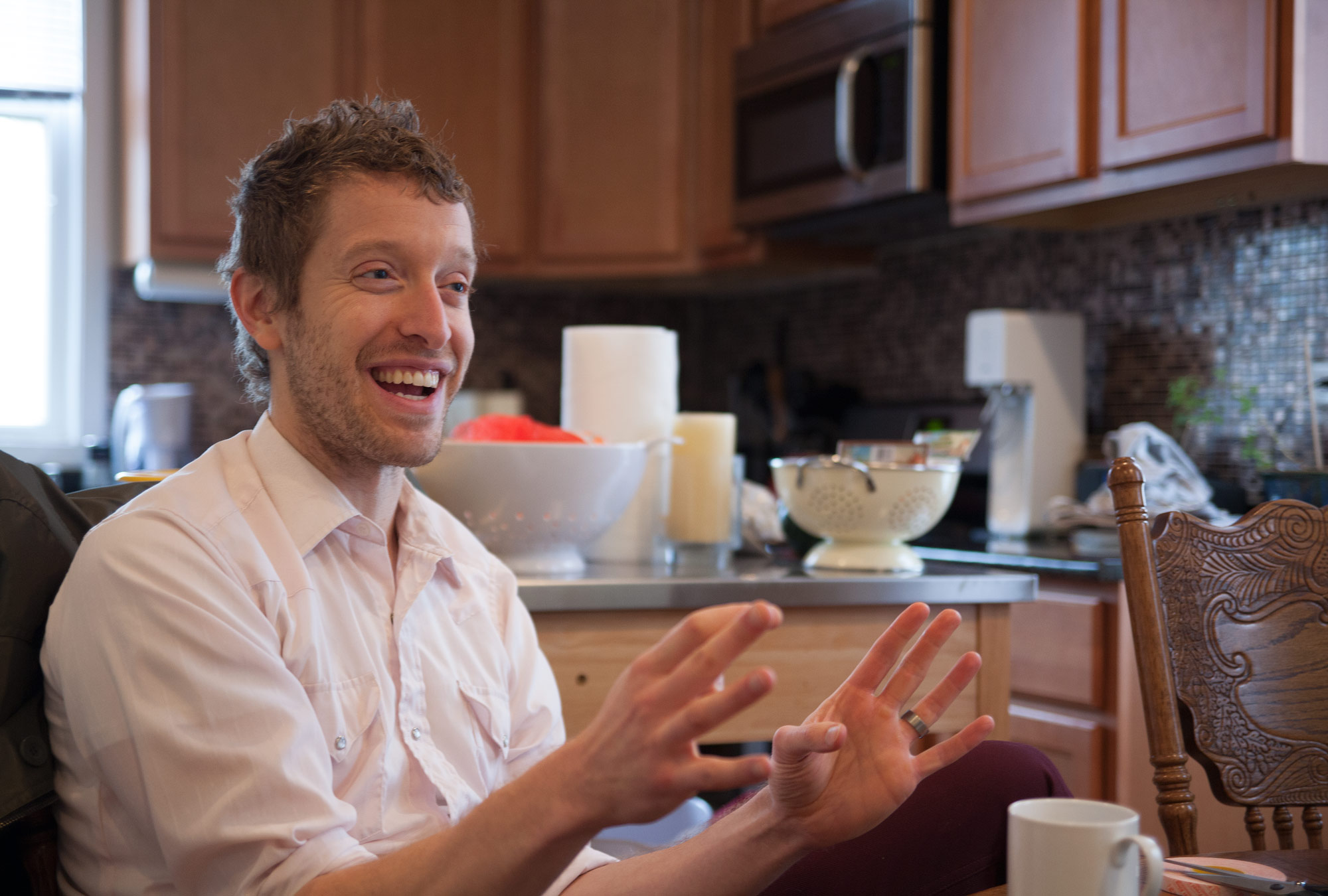 I was very much an eager beaver. At my first [piano] lesson—it was the week before my sixth birthday—I got a pencil with a keyboard on it as a present. And I was excited about that.

I tootled along until I was 12. I asked my piano teacher whether it would be possible to start incorporating rock fare into lessons, because I was already playing by ear. I remember being at my grandma’s house and watching the video for Cheap Trick’s “The Flame,” the late-80s power ballad, and having this moment where I thought, I could go over to the piano and figure that out.

My teacher’s response was, “If you want to start incorporating more REO Speedwagon and Chicago, I see no reason why we couldn’t do that.” I thought that was a pretty dated response. I don’t know what I would’ve been happy to hear in that moment. Hair metal would’ve been a start, for sure. I decided the piano-lesson scene wasn’t swinging enough. 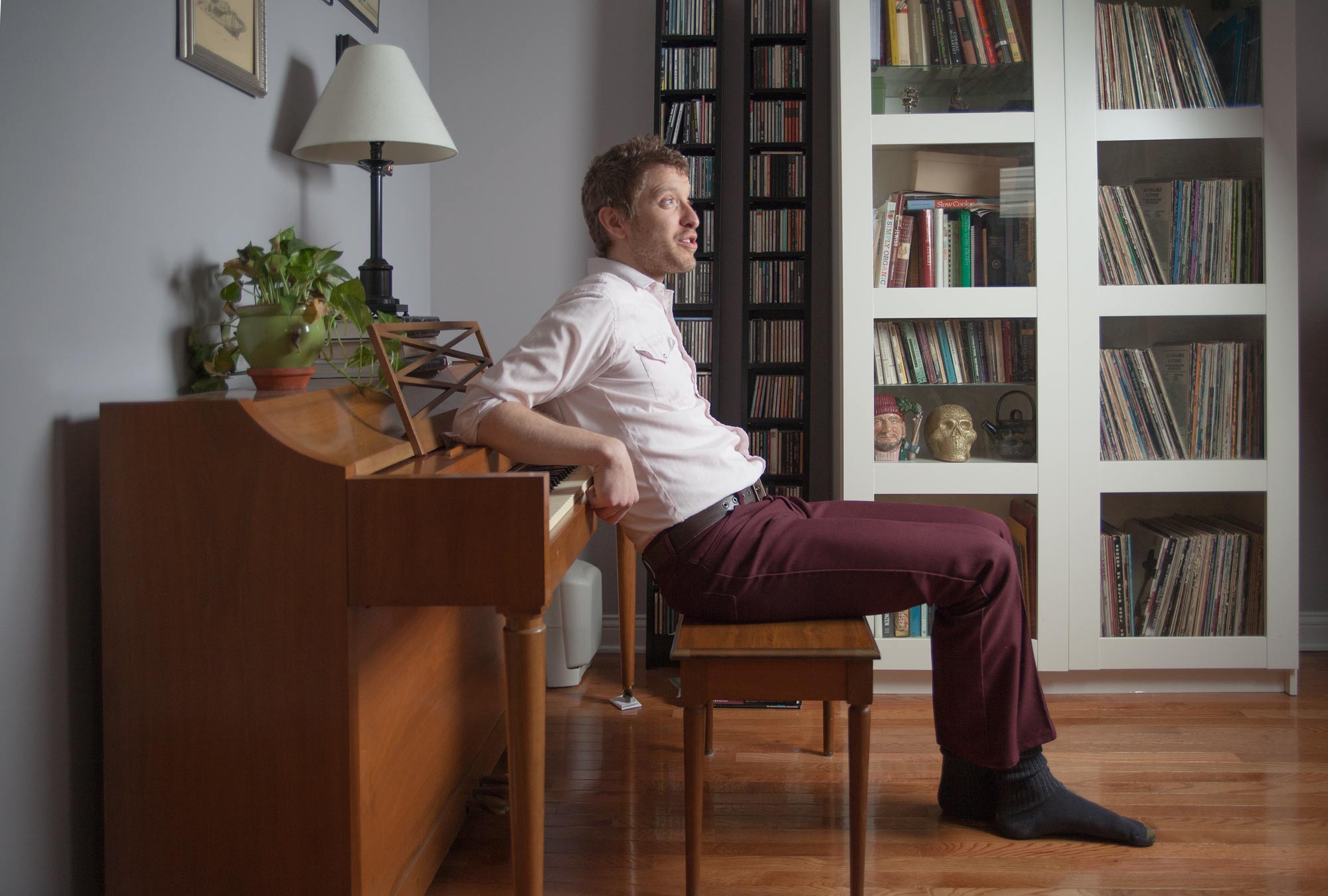 I did sing in two a cappella groups: the Spizzwinks and the Whiffenpoofs. When I got to Yale as a freshman, I found out that if you stuck it out with a cappella, by senior year you could do this world tour for three months. Coming from the midwest, I didn’t know it was not the nerdiest possible thing you could do; there’s this culture where it was cool to say what your favorite Rodgers and Hammerstein musical was.

We were booked to sing at the governor’s mansion in New Jersey. And Geraldo was there. I was the emcee, so in between songs I would say one-liners like, “If you want to take the Whiffenpoofs home with you, there are two ways to do that, the second of which is to buy our CDs, available in the back.” Geraldo saw me do my shtick, came up afterwards, took off his name tag, and said, “I think you’ll know what to do with this.” Very beguiling. 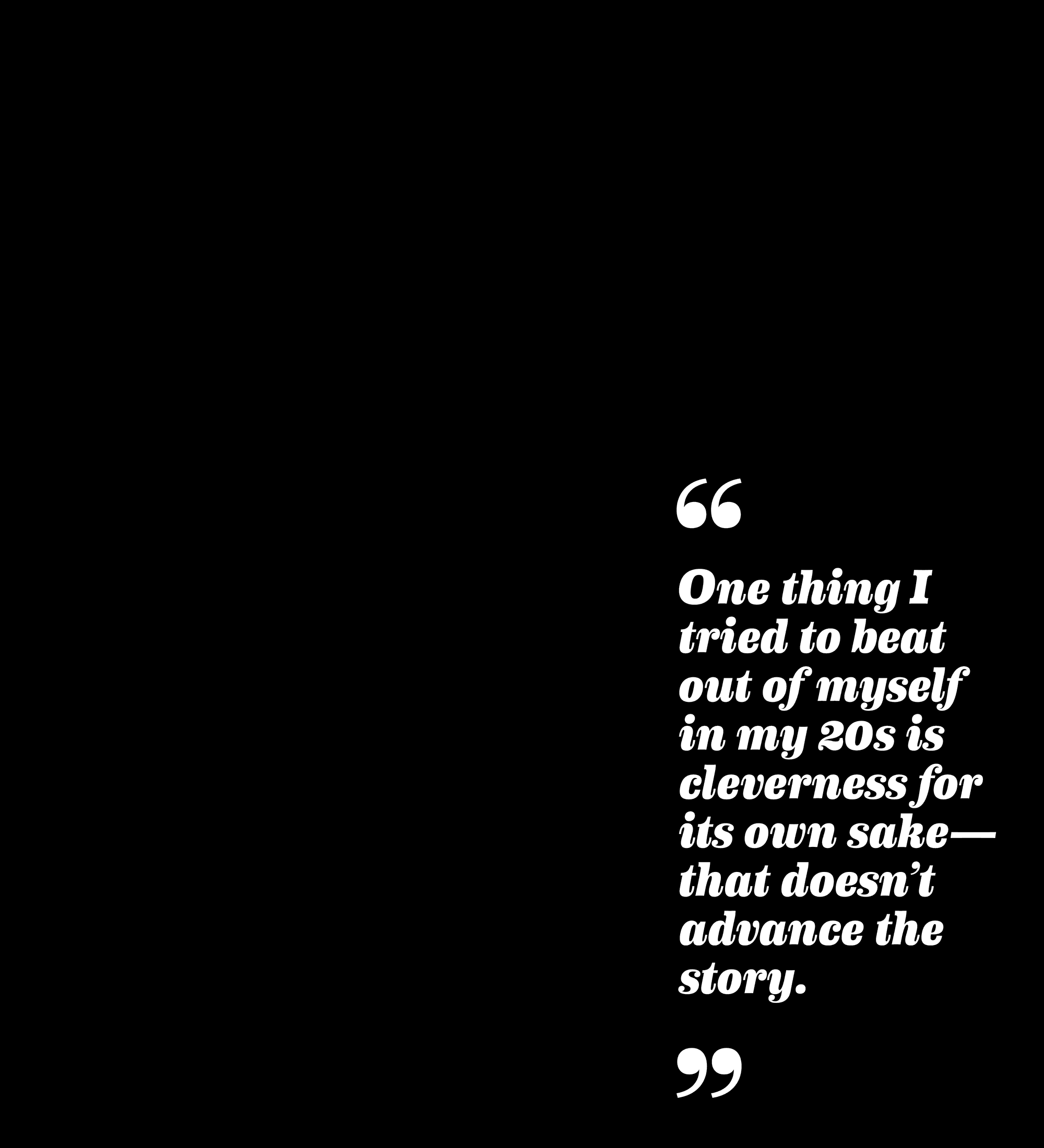 We had a regular Monday-night gig at this old bar in New Haven called Mory’s. One night Barbara Bush would be there. And I’m serenading her. As a means of accumulating bizarre experiences, I’m superfortunate to have been a part of that.

When I moved to Chicago, I bought a book called Start Your Own Band. And I tried to follow it—not everything. One piece of advice was, “Make a flyer with some of your best lyrics. And leave it on every table in the bar, so people have something to take home.” People are naive in different ways, especially at 22. I felt like if I checked every box on the business side, the rest would take care of itself.

I envisioned a linear process. And you quickly realize the real reasons you make art. It is certainly not the path where every year you make more money, get promotions. Ultimately, every creative endeavor has to be self-sufficient in the fulfillment scale.

The thing I’ve put the most effort into was writing original music and fronting a band. And I was feeling like I was banging my head against the wall. As Kanye says, “When you try hard, that’s when you die hard.”

There’s a line, and every band that I played with was at least flirting with it. Even lyrically there’s this line where you don’t want to get too close to novelty. And I was not always really good at believing it was there. I played with Bobby Conn for a long time. He toes [the line] and is aware of it, and I think he’s been victorious with negotiating his relationship with it. One thing I tried to beat out of myself in my 20s is cleverness for its own sake—that doesn’t advance the story.

I learned that your perception of what you do and other people’s perceptions are completely different. Baby Teeth was meant to be this pop band, very simple songs, and people thought it was completely bizarre. Like prog doo-wop or something. It popped the bubble of thinking I was going to be commercially successful. Because huge stars do not confuse anybody. That’s the genius of somebody like Sheryl Crow. She can stand in front of thousands of people and convey something incredibly simple that’s hard to misinterpret—like a John Deere tractor. Everything I’ve made has been outside of that category.

I started teaching piano in 2001 and began Piano Power in 2007, when I started bringing in other teachers. We have about 300 kids right now and 18 teachers. A lot of kids come to Piano Power from other experiences where they’ve been pushed through a method without enough checking in on whether their love of music is deepening or eroding. Our kids tend to work with teachers who have a strong interest in making sure they love what they’re doing. Most of the time that comes with being superinteractive. 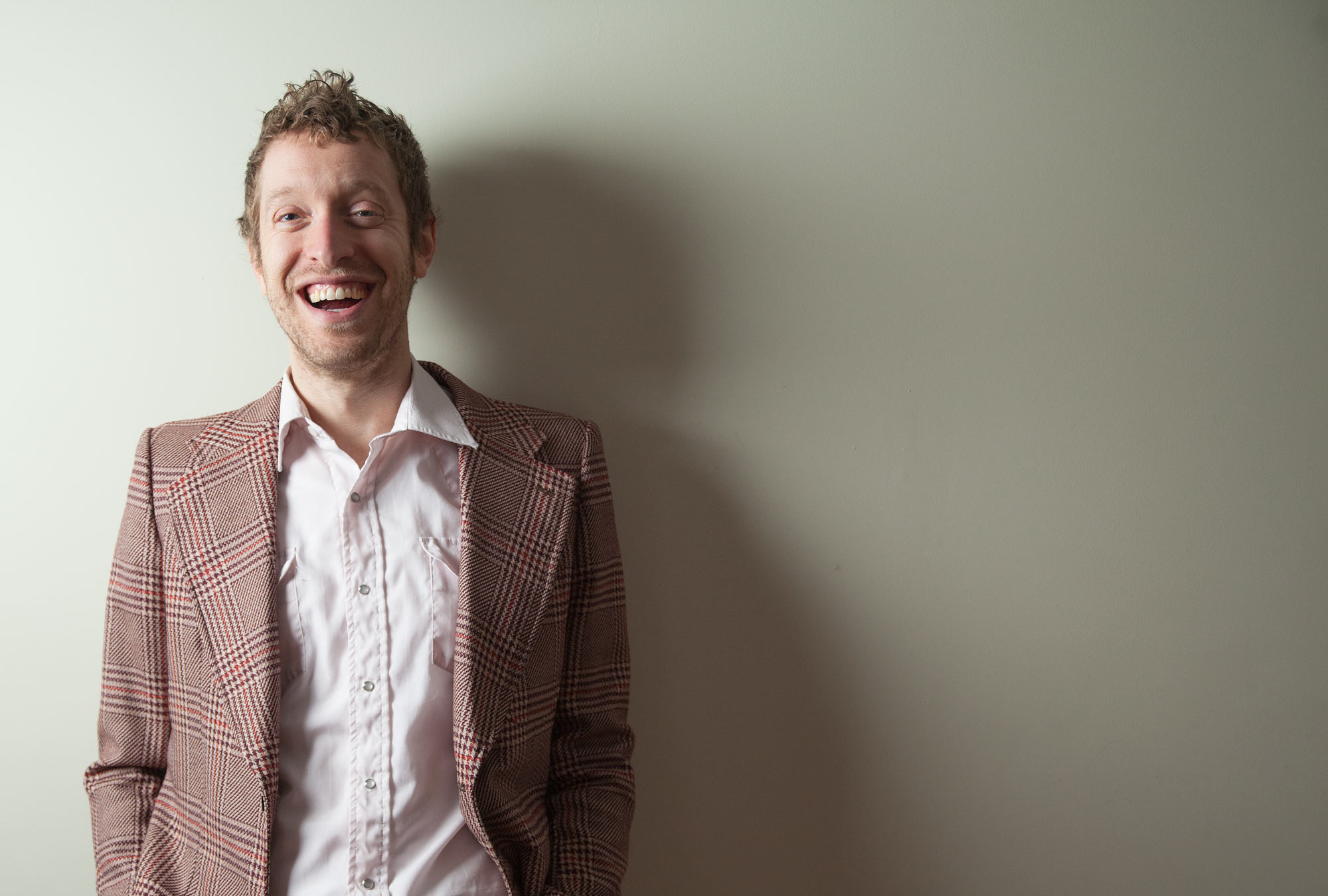 It goes back to that moment with “The Flame.” There is a way to communicate the melody and the chords and turn piano into a cool activity. You can’t assume it’s something they’re going to gravitate to. Let kids play what they want, encourage composition—even if they’re seven years old and composition means stringing five notes together. During recitals we have amazing moments of eight-year-olds singing and playing original music.

I’m finishing up this David Byrne book, How Music Works. He says that the economy has shifted in a way that makes being a music consumer easier than a music maker. As a kid with access to the Internet it’s easy to say, “I can explore everything that’s ever been made, but I’m not necessarily going to relate to it as someone sitting in a log cabin playing folk music. So I’m gonna buy stuff off iTunes.” We’ve been able to demystify what it means to write your own song and dip your toe in the water of contributing instead of downloading. 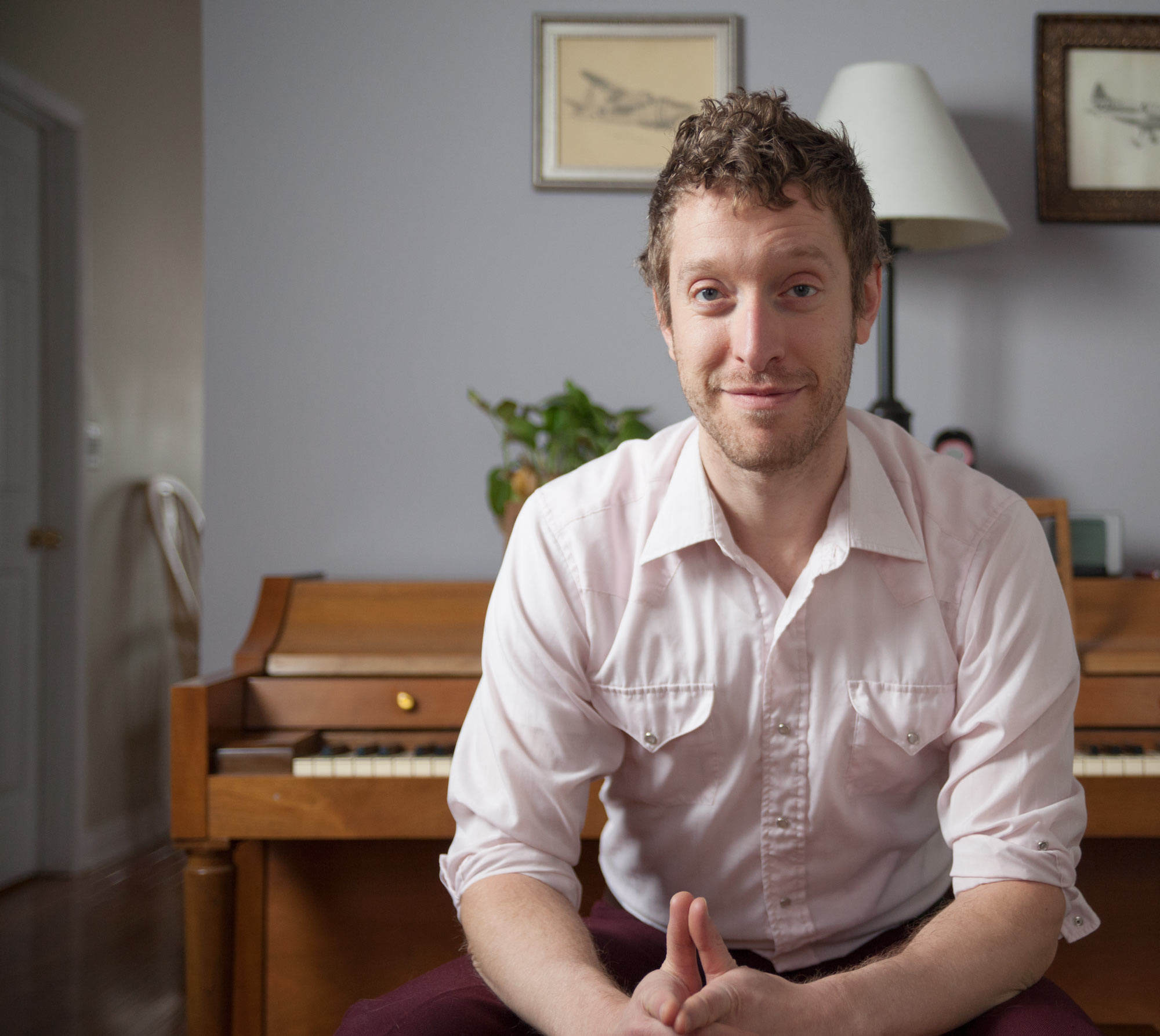 Shame That Tune started because I did an event for WBEZ where Ira Glass and a few others were giving ten-minute talks about creativity—and they brought me in to play a song that comically summarized what had been discussed. People liked it, and it was accessing something I wasn’t using. It’s such a random skill, I guess—making a comic response song to a story that somebody else tells. And there was no existing avenue for me to do it with the spirit I wanted.

[Shame That Tune cofounder] Brian [Costello] and I knew we didn’t want it to be a reading series because that felt too serious. The idea of turning it into a game show would make it more fun and puncture the idea that the audience had to put on their pointy hats and listen to cultural-uplift material. I never worry about [writer’s block] because I’m just trying to do something really stupid. If I was trying to do something remotely artistic, I’d get writer’s block. I’m setting somebody’s story to “Baby Got Back.”

Quite clearly this is a neighborhood show that people love—and I’m grateful for that. But odds are the progression will be steady rather than explosive. The ongoing process for me is making peace with the cultural role that you have.

The comedy is more fun for me when it’s a refuge from the seriousness of writing songs. The idea of being somebody who does comedy every night is not appealing to me. The idea of being somebody like Jewel who goes onstage every night and bares her soul is not appealing to me. Both of those things feel most exciting to me when they are release valves from something else. ● 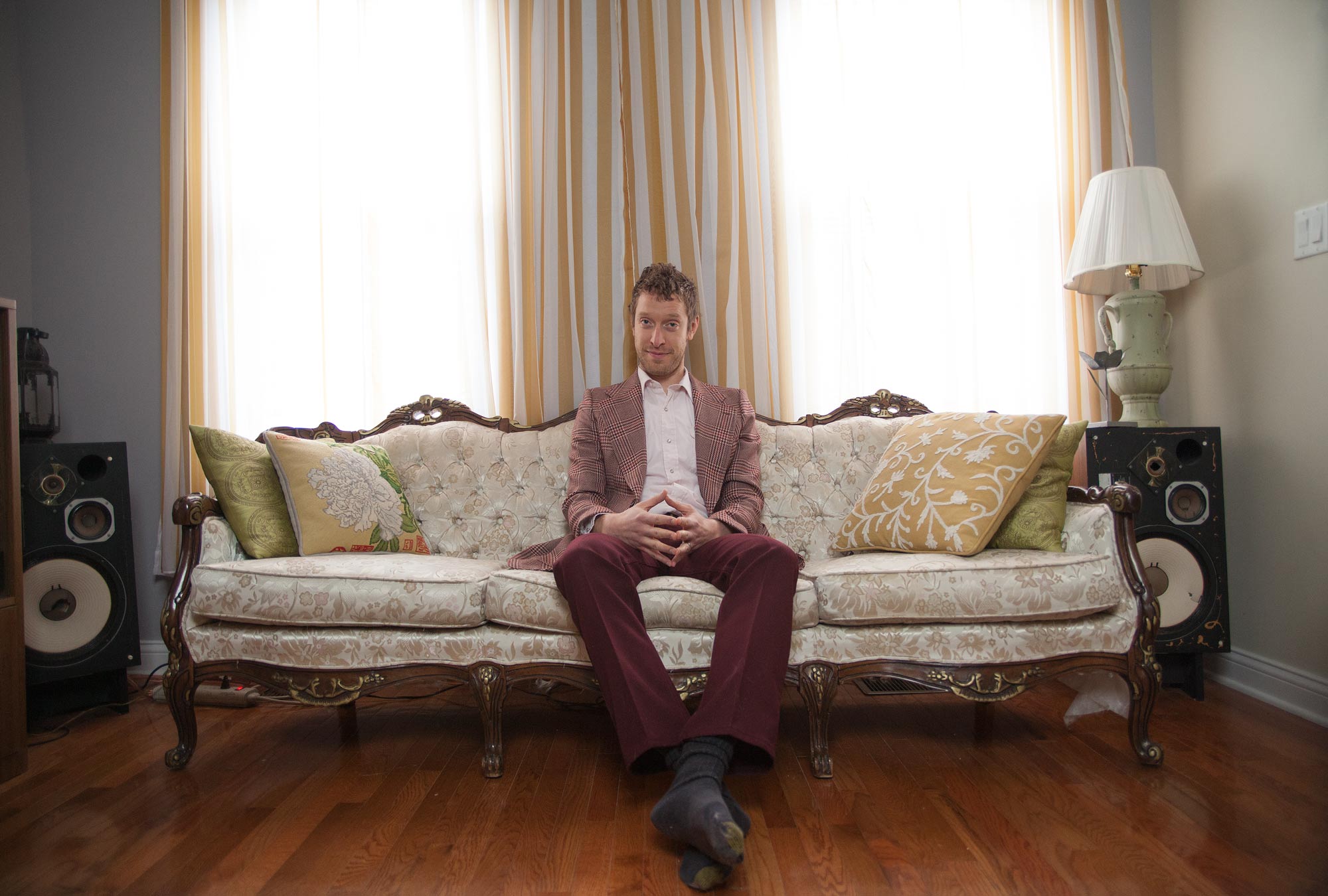